Discovering the heart in Hartington Creamery 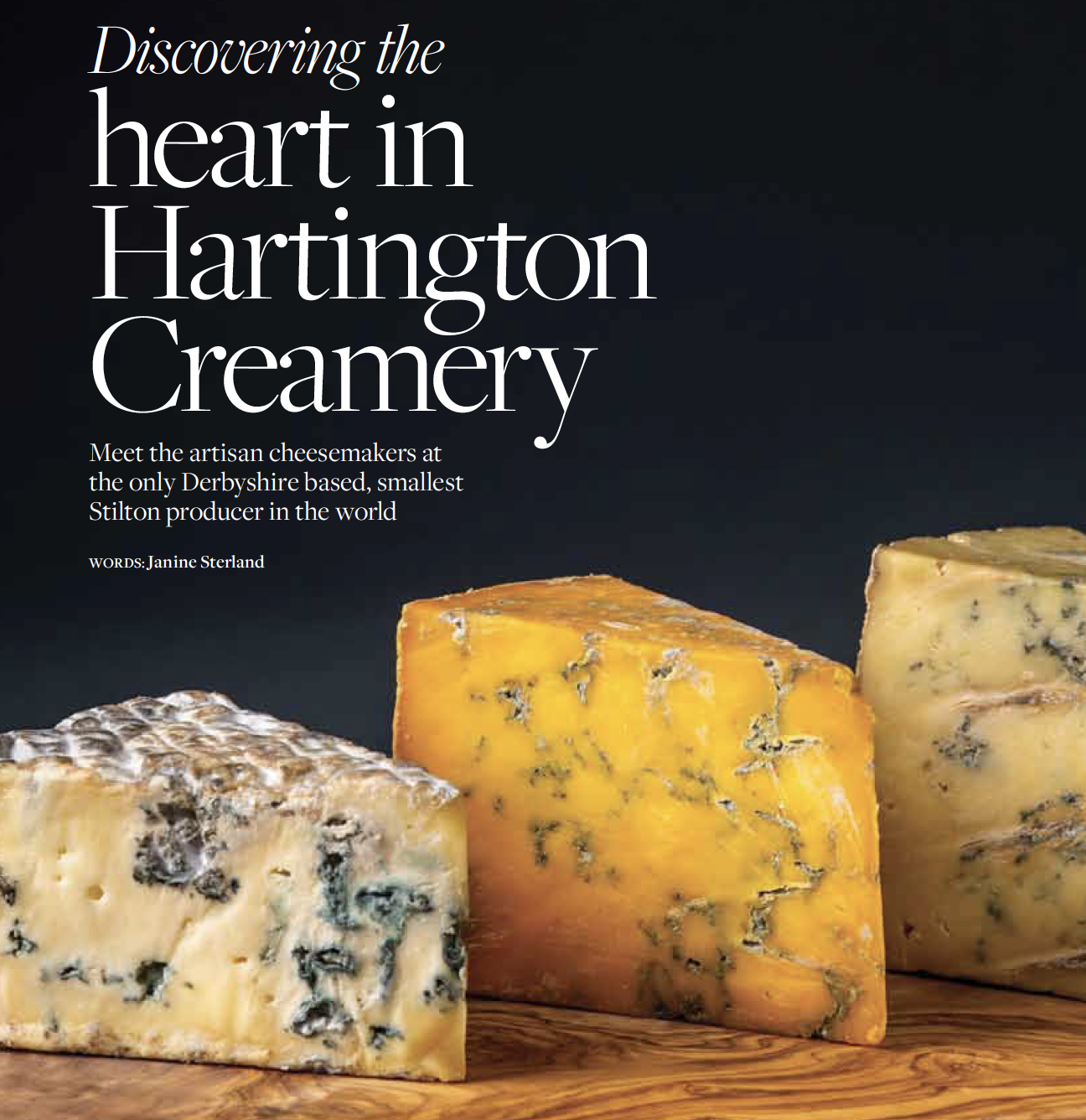 Discovering the heart in Hartington Creamery

Meet the artisan cheesemakers at the only Derbyshire based, smallest Stilton producer in the world

Through a tapestry of vivid green pastures and interlocking drystone walls, Hartington Creamery, Derbyshire’s only Stilton producer, is found in the most idyllic of settings. On the site of a Neolithic burial ground featuring the remains of a Roman road running through its farmyard and into the surrounding fields, this historic location continues as a unique route – accessed by 200 dairy cows as their very own milking parlour highway.

‘Pikehall Farm was specifically chosen as it meets official legislation in making Stilton,’ explains founding member Alan Salt. ‘It can only be made in the counties of Derbyshire, Leicestershire and Nottinghamshire. As we are in the heart of the Peak District National Park, we have had to adhere to strict rules in terms of maintaining the outward appearance of the creamery’s old buildings.’

Dating back to the late 19th century, the creamery’s extensive history includes a series of monumental changes for cheese making. ‘Before 1870 there were no cheese factories, all cheese was made on farms or in cottage kitchens,’ says Alan. ‘The first genuine cheese factory was at Longford, Derbyshire, in 1870. This system was introduced to achieve economies of scale and took off quite quickly, particularly in Derbyshire and Staffordshire. ‘The seventh Duke of Devonshire helped to found the creamery in Hartington (later known as The Hartington Cheese Factory, later still Dove Dairy). He was the main local landowner and most farmers in the area were his tenants. ‘He supplied the land and was a key part in enabling the factory to be built, hence the rent for the site. Setting up the creamery also allowed farmers to concentrate on producing milk, which left the cheesemaking to full-time cheesemakers. ‘Generally, this led to better returns for the milk and cheese as the end product was consistent and usually worth more.’

Initially, the creamery produced some Cheshire and Cheddar as well as Derby cheese, which Alan describes as a crumbly white variety. ‘Unfortunately, the site was seriously damaged by a fire in the late 1890s and closed down. ‘It had a rebirth and was rebuilt in 1900 when John Marriot Nuttall arrived in the village and started producing blue and white Stilton cheese. ‘Mr Nuttall was from a well-known family of Stilton cheesemakers from Leicestershire; his father Thomas Nuttall was world-renowned for his cheese and passed on his skills to his son – demonstrated during the 1920s as Hartington Cheese was awarded the Royal Warrant as a supplier to King George V.’ The creamery was sold in 1962 yet, despite a number of investments and large-scale programmes of expansion lasting until 2004, the site sadly closed in 2009.

However, in 2012, the tradition was reinstated when the new Hartington Creamery made its first cheese at Pikehall Farm. ‘At Hartington, we have a good story behind the business, a sort of phoenix from the ashes scenario,’ suggests Alan. ‘For the area to have such a rich history of cheesemaking to then suddenly lose the dairy in 2009 was awful as it was a big part of the community and history of Hartington. ‘Having cheesemaking back in the parish was a huge triumph and helped bring back a bit of what put Hartington on the map.

Hopefully, Hartington Creamery will continue adding to the rich history of artisan traditional cheesemaking.’ There are, explains managing director Robert Gosling, many different roles involved in these artisan processes. ‘From the actual making of the cheese and making sure it is correctly looked after at every stage of its lifecycle ensures that what we produce at Hartington Creamery is at the highest quality possible. ‘At the start of the cheesemaking processes, pasteurisation is one of the most important steps which ensures the milk meets the criteria before the process can occur.’ Following pasteurisation, starter cultures are added to the milk, then the coagulant is added to turn the milk from a liquid into a solid. ‘The curd is then cut – this process separates the curds and the whey,’ adds Robert. ‘The whey is drained off the curd until ready to be processed. It is salted, put into the moulds and, a few days later, a process called binding will happen – the sealing of the edges of the cheese – as this stops the mould from growing prematurely. ‘The cheese will then be moved into a cheese store and left to mature for between eight to 12 weeks, depending on what type of cheese it is. ‘About five weeks into the Stilton cheese’s lifecycle, they are pierced – this is the action of creating holes in the cheese with long piercing needles, which allows the cheese to go blue on the inside and gives it the marbled effect on the inside. ‘As the cheese enters the latter stages of its lifecycle, it can be graded – the process of using a cheese iron to pull a bit of the cheese out.’ This careful inspection, he explains, identifies the amount of ‘blueing’ inside as well as the texture and smell of the cheese. ‘This ensures it is the right quality and that it tastes good,’ adds Robert. ‘Once the cheese has been graded it can be placed in the chilled store ready to be packed.’

Currently, the creamery – which is featured in the new series of Channel 4’s Food Unwrapped – produces around 85 tonnes of cheese a year, including varieties of blue and white Stilton and many unique creations. ‘Our team of 11 have a combined total of more than 100 years experience in cheese making,’ explains Robert. ‘We operate as a family business. Many members of staff are related, such as production manager Diana Alcock, who works with her mum, Myrtle, and sister, Julie. Andrew Gee, a cheesemaker, works with his nephew Ryan Gee. As a result, the creamery has a great family feel and the staff are more like an extended family. ‘Alan is coming up to his 50th year involved in the cheesemaking industry and Ryan is a fourth-generation cheesemaker in his family lineage.’ As an apprentice award-winning cheesemaker, Ryan continues his family’s connection with Hartington Creamery. ‘I have an involvement in every part of the cheesemaking process,’ says Ryan. ‘From making the cheese, binding, turning and piercing to packing the cheese ready for customers – every day there is something different to do, it keeps the job fun and interesting. ‘Ensuring consistency is perhaps the trickiest part. All our products are handmade so we do our best in ensuring we are consistent in what we do and that we continue to produce cheese of the highest quality, the quality that our customers expect.’ Ryan has worked with the team to develop innovative flavours, including their crumbly Peakland White recipe with the addition of chocolate and chilli. ‘We brainstormed ideas of potential flavour combinations that would work well with our cheeses and trialled this with success with staff at the creamery.’ In addition, Ryan feels very fortunate to learn his craft through working with a team of experts who use artisan cheesemaking methods. ‘We are the only Stilton maker to make Stilton on a farm and make small batches that are all handmade to the traditional old-fashioned methods. ‘I watch and learn from all of the members of staff; we are lucky to have such a vast knowledge of roles in the cheesemaking process. To be part of a team that creates a tangible, high-quality end product is very rewarding.’