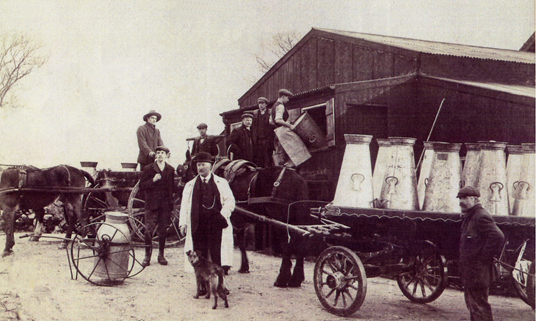 The seventh Duke of Devonshire founded the Hartington Creamery as part of his Chatsworth Estate in 1876. Built on Mill Lane, Hartington, the Dove Dairy was the first purpose-built cheese factory in the country, it remained at the same site until 2009 when it was closed by competitors Long Clawson shortly after they purchased the business. Until its closure, it was the oldest cheese production site in the UK. We re-established the Hartington Creamery at our current home Pikehall Farm in 2012, where we have 200 dairy cows producing the finest Derbyshire Dales milk.

The Cavendish family bought Hartington Manor in the 17th century; hence the courtesy title of the Marquis of Hartington is given to the Duke’s eldest son. The Duke built the factory so that the tenant farmers had a purposeful use for their surplus milk. The cheese made at this time was a crumbly Derbyshire cheese similar to Cheshire Cheese.

In 1894 there was a catastrophic fire that burnt down two-thirds of the original timber-built creamery. The business failed and was closed, then in 1897, Thomas Nuttall bought the site. Originally from the traditional home of Stilton thein the Vale of Belvoir, he started producing the famous Derbyshire Blue Stilton Cheese in 1900 made using local Dales milk that we still use today following the same recipe. Our Stilton is richer in cream and not as dry as other makers, which is only possible using the handmade artisan techniques that distinguish our cheese from others.

The main picture is the earliest image of Thomas Nutall outside the creamery. Pictured below is the staff of the Hartington Creamery who worked for Thomas Nuttall circa 1900’s. Above is the original first purpose built cheese factory in the country the Dove Dairy, Hartington around 1876, along with the rent receipt from the Duke of Devonshire for £16.10. 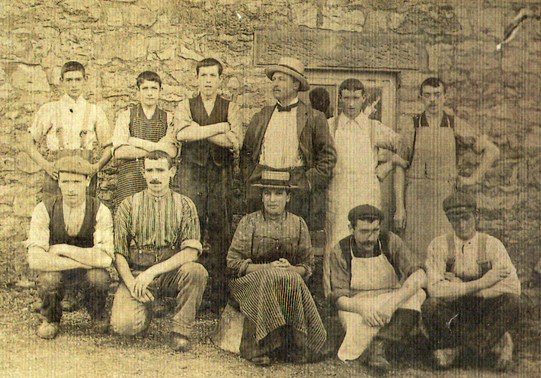